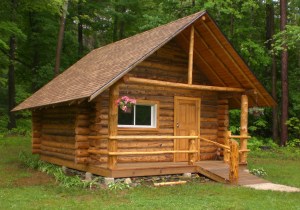 Twelve years ago Park Ranger Bill Schreiber began working at Coolidge State Park in Plymouth, Vermont. This summer, a goal that was set during that first season in 2000 will finally be met.

On July 23 Coolidge State Park’s new nature center will be unveiled. A grand opening celebration is scheduled to begin at 2 p.m. The celebration will include refreshments and a visit from Smokey Bear, and will conclude with the nature center’s first official program presented by the Vermont Institute of Natural Science at 7 p.m.

When Schreiber first began work at Coolidge, he was joined by his wife, Janey, who also was a member of the staff at the 80-year old park nestled in the middle of Calvin Coolidge State Forest. During that first season the park hosted several nature programs presented by Pete Corradino, the park naturalist at Jamaica State Park who also happened to be Janey’s son. During those events, the Schreibers realized the need for a proper location to present visitor programs. “At the time, Coolidge State Park was losing its playgrounds and we thought the park needed something extra for our visitors.  A  nature center seemed the perfect fit for this campground.”

At the time, programs were held in an open area across from the park office. In the event of rain or other inclement weather, programs were often canceled. Because funding was not available at the time for this project, the Schreibers sought permission from Parks Regional Manager Nate McKeen to begin raising money toward the construction of a new nature center.

Over the years the park sold a variety of items with the proceeds going toward the center. This included handmade cutting boards, photo frames and jewelry boxes handmade by Schreiber during his free time in his wood shop.

By the end of 2008, the park had raised enough money to begin construction the following year. Sadly, Janey was not able to celebrate. She passed away unexpectedly on December 27, 2005. Dedicated to not letting their dream slip away, Bill was even more committed to seeing the project through.

During the 2009 season, two jewelry boxes Schreiber constructed using wood from a fallen cherry tree within the park was sold at a silent auction. The two boxes sold for more than $500 each, adding $1,025 to the nature center fund.

“The park has been very fortunate to have many individual monetary donations toward the construction of this nature center,” Schreiber says. “Additionally, a long-time camper donated his skills to help survey the area for the new building. All the donations are greatly appreciated. Without these generous people, we would not have been able to build a nature center.”

Site work on the project began in 2008 with a small parcel of land cleared to make way for building construction the following year. Construction began in 2009 with the help of a team from the National Civilian Community Corps. This eight-person crew, based out of Perry Point, Maryland, spent eight weeks working with park staff to construct the small, one room log structure.

By the fall of 2009, most major construction was completed. Schreiber and his park staff put the finishing touches on the building over the course of the 2010 park season and through the early part of this summer. Now, more than a decade after the first dollar was raised, the Janey Schreiber Memorial Nature Center will open on July 23, 2011.

Admission to the park during this special event is free. For more information contact Coolidge State Park at (802) 672-3612.

This entry was posted in Events and tagged Coolidge State Park. Bookmark the permalink.