Hats on the Program at Coolidge April 12 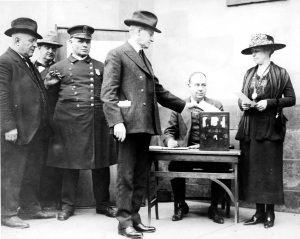 Governor and Mrs. Coolidge cast their own votes in Northampton for the 1920 national election. Photo courtesy Forbes Library & Museum

A special program on Hats will be held at the President Calvin Coolidge Museum and Education Center on Saturday, April 12 at 2:00 p.m.

President Lincoln was known for his stovepipe hat and President Kennedy didn’t care to be photographed in a hat. Men in President Coolidge’s time rarely went hatless. Coolidge was a man of many hats from his suede hat for farming, top hats for formal occasions, a boater in the summer, and even an oversized cowboy hat to please his western hosts. Did you know he bought his vivacious wife her fashionable hats?

We’ll view a selection of photographs and magazine illustrations that show the variety and changes in hat fashion from the 1890’s through 1930. One pertinent issue was women’s right to vote, guaranteed to women when the 19th amendment was passed in 1920. Another was growing awareness of the toll that using feathers on fashionable hats was taking on bird populations. This led to what would become the National Audubon Society, founded by two women.

We’ll view several hats from the collection of the Vermont Division for Historic Preservation including three of President Coolidge’s hats, two of Grace’s, and several others from the Plymouth and Woodstock area. Visitors are welcome to wear their favorite hats, historical or otherwise. Refreshments follow.

This program is the third in a series of winter to spring programs sponsored by the Calvin Coolidge Memorial Foundation in collaboration with the Vermont Division for Historic Preservation. The Center will be open on April 12 from Noon to 4:00 p.m. for Family Day and features the interactive exhibit: “More Than Two Words”: The Life and Legacy of Calvin Coolidge.

To go with the theme of the day, hands on activities in the classroom include making paper hats from noon until 2:00 p.m. Visitors of all ages can enjoy old time movies in front of the fireplace, explore historic Plymouth Notch with the Coolidge Quest and stop in at the Cheese Factory, which is offering a 15% discount for those wearing historic hats!

The President Calvin Coolidge Museum and Education Center is located on 3780 Route 100 A in Plymouth. Programs are free but donations are appreciated. For further information see www.calvin-coolidge.org or contact education@calvin-coolidge.org and 802-672-3389.

This entry was posted in Events and tagged Calvin Coolidge Museum and Education Center, Vermont Division for Historic Preservation. Bookmark the permalink.